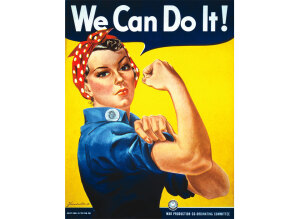 Marion Lowry, 96, of Clinton, passed away peacefully on May 19, 2021 at Chapel Hill Community Nursing Home. Born August 13, 1924, in Akron, to the late George and Ruth Kendall. During World War II, Marion worked at Seiberling Rubber and Sun Rubber building tanks.  She was a “Rosie the Riveter” for a short time.  After the war, she continued to work at Seiberling making rubber boats.  She also worked for Mr. F. A. Seiberling at Stan Hywet Hall in the private dining room. While a homemaker, Marion was often seen driving around Canal Fulton and Clinton in her big white 1959 Cadillac selling Avon.  After her children were grown, she worked for 20 years at Chapel Hill Community Nursing Home as a housekeeper. In addition to her parents, Marion was preceded in death by her husband James “Art” Lowry after 70 years of marriage and her granddaughter, Alyson Ley. Marion is survived by her children: Sandra (Bob) Lawson of New Port Ritchey, FL; Barbara Blowers of Navarre, OH; James (Delaine) Lowry Jr. of Big Pine Key, FL; and David (Jackie Woodcock) Lowry of Canton, OH. She is also survived by 8 grandchildren, 12 great-grandchildren, and 3 great-great grandchildren. Friends will be received on Monday, May 24, 2021 from 11:30am to 12:30pm at Swigart-Easterling Funeral Home, 624 Cherry Street (Rt. 93), Canal Fulton. A funeral service will be held at 12:30pm with Pastor Sandra Hutchison officiating. Interment will follow at Ohio Western Reserve National Cemetery. In lieu of flowers, donations can be made in honor of Marion to Chapel Hill Community or the Stark County Humane Society.

Her guestbook and Video-Gift tribute may be viewed online at www.SwigartEasterlingFuneralHome.com.

To send flowers to the family or plant a tree in memory of Marion Fay (Kendall) Lowry, please visit our floral store.

Your browser does not support this video format. You should be able to view it in Chrome, Safari or Internet Explorer.